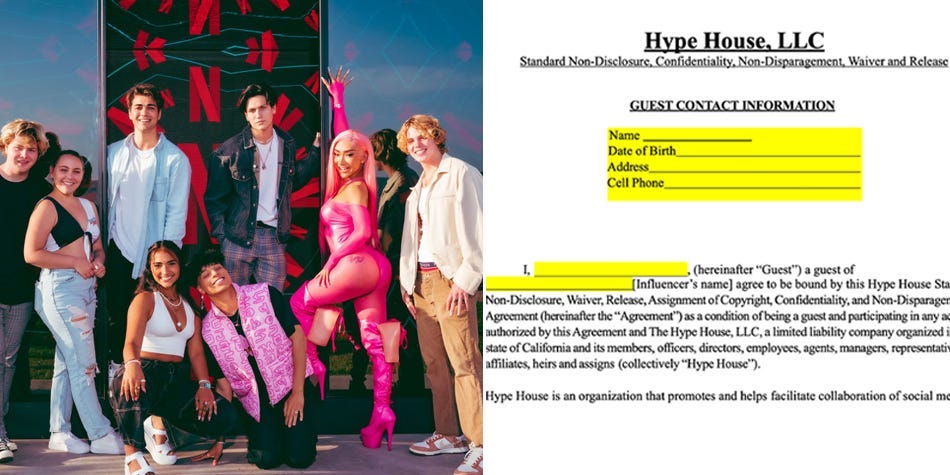 Social-media collectives often market themselves as a revolving door for talent to collaborate freely — but that doesn’t mean they come without rules.

Hype House, one of the longest-running TikTok groups, has several house rules — 11 to be exact — that new members must agree to when they join. The rules appeared in a recent contract shared with Insider by a manager representing an active member of Hype House. They asked to remain anonymous for fear of possible retaliation.

In the contract, talent and guests are required to sign several non-disclosure, non-disparagement, confidentiality and disclaimer-and-release clauses. The clauses protect Hype House from all damages to the Los Angeles mansion and give Hype House Group and its de facto owner Thomas Petro the rights to all content filmed at the property.

Hype House was formed in 2019 by Petro and influencers Chase Hudson and Daisy Keech (who left in 2020 and sued Petro and Hudson over ownership of the brand) Although the group was founded with 20 TikTokers, it currently appears to have around seven active members. The members live in a Spanish-style mansion located just outside of Los Angeles, and in exchange for housing, they are asked to create content with other members of Hype House. As the star power of its initial members grew, so did the Hype House brand. Some of its notable past members include TikTokers Addison Ray, D’Amelio Bone, Larray and the Lopez brothers. Earlier this year, Netflix released a reality series, “Hype House,” which aimed to document the inner workings and interpersonal drama between the members.

Although the collective is not a management company, the leaked contract shows it has laid out strict rules for those who live in and pass through the palace — including a list of actual “house rules.” Some rules repeat non-disclosure and non-disparagement agreements, including one that protects the TikTok brand from liability for any injury and property damage, while others lean more towards social codes of conduct, such as banning drug use. Those who sign the contract specifically have a rule not to talk to anyone about the details of the contract.

Two lawyers with experience in the social-media space, who reviewed the deal, said the deal was one-sided in favor of Hype House.

“This deal is completely one-sided,” said Jilene Hess-Verdon, a Los Angeles-based lawyer who represents entertainment industry influencers and others. “Most contracts will say, ‘Hype House has the following responsibilities…’ but none of the standard provisions of Hype House and their obligations are in the contract. That’s very unusual.”

Legal experts say the agreement protects Hype House, and dictates nothing about how Hype House serves its members.

Two lawyer insiders spoke to the lack of “standard provisions” they’re used to seeing in contracts in the industry.

“It’s missing almost all the standard provisions you’d want to see in a standard influencer contract,” says John Pfeiffer, an entertainment lawyer with many social media-famous clients. “First, there is no compensation. Second, all intellectual property is assigned and transferred to Hype House.”

“This is an agreement that surrenders all rights you have in connection with any connection with Hype House. Four, the reason it’s unusual,” Hess-Verdon said of NDAs, non-disparagement, confidentiality and waiver-and-release agreements. “They can edit and defame you, even falsely, and you have no recourse.”

The only benefits seem to be to the person who signs the contract or potential member of Hype House, free accommodation and the opportunity to grow their social-media following.

Lawyers also said they were concerned about how broad some of the agreement’s provisions were. In several sections, Hype House asks the signatory to waive all claims made during their time in the house and forever thereafter.

Hess-Verdon specifically pointed to language used in a statement that calls for talent to “assume all liability for all risk of personal and/or property damage or bodily injury to the home.” This includes “accidents, casualties or incidents or anything related to the Hype House group”.

“You are giving up all rights to any claims you may have,” he said. “Everything. All the known-unknown future demands, which is too much.”

Both Hess-Verdon and Pfeiffer said they wondered if that was the only agreement Hype House had proposed, or if there was a separate agreement outlining the group’s duties and responsibilities.

Petro and Hype House Group did not respond to Insider’s multiple requests for comment. But the manager who provided Insider with the contract said it was their client who got it after joining Hype House and signed it before the client consulted them.

“If that’s the only deal that’s got personal influencer representation, they’ve dropped the ball,” Pfeiffer said. “Too much to be said… There’s no way I’m going to let a client sign this contract.”

Here’s what the leaked contract says about Hype House’s “rules”: