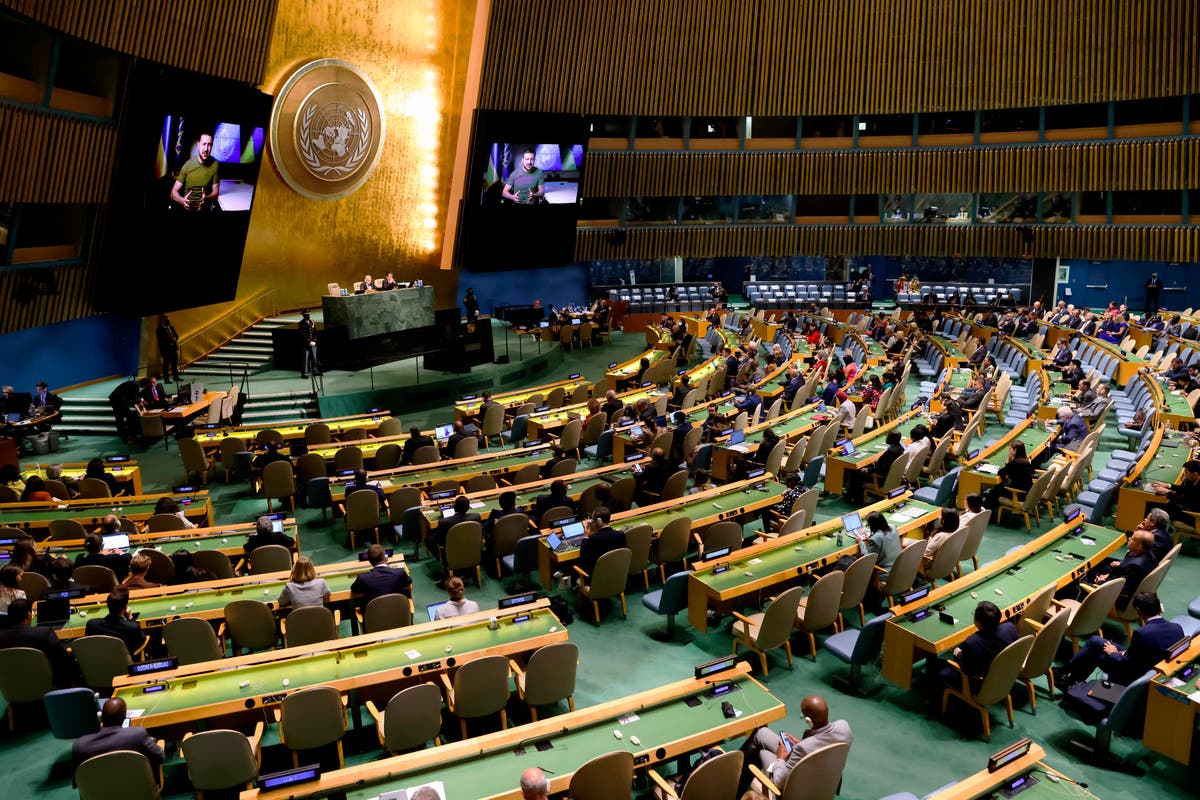 After two years of talks dominated by the coronavirus pandemic, this year’s UN General Assembly has a new occupier of center stage: the war in Ukraine.

Appeals by world leaders for peace were both altruistic amplifications born of the plight of the besieged Ukrainians as well as self-interest. As several speeches made clear, the repercussions of the Russian attack were felt thousands of miles away.

“It is not just the desperation that we are seeing in 2022 such willful destruction of cities and towns in Europe. We are experiencing this war directly in our lives in Africa,” Ghanaian President Nana Addo Dankwa Akufo-Addo said on Wednesday. “Every bullet, every bomb, every shell that hits a target in Ukraine, hits our pockets and our economy in Africa.”

Speeches that omitted direct reference to the conflict were rare, but the war resonated even in the absence of direct invocation. Kazakhstan President Kassym-Jomart Tokayev has never let the words “Ukraine” or “Russia” slip from his lips, but he has made several apparent allusions.

He opened his remarks by painting a bleak picture of a world engulfed in a “new, bitter period of escalating geopolitical conflict” that includes “the possibility of using nuclear weapons, not even as a last resort.”

Just hours later, Russian President Vladimir Putin – who is not attending the UN General Assembly – announced that he would not hesitate to use nuclear weapons to defend his country’s territory.

Russia is a key ally of Kazakhstan, and the war in Ukraine has left the former Soviet country in an awkward spot. Tokayev performed a similar dance during Pope Francis’ visit last week, generally denying an ill health while refusing to speak directly about Ukraine.

The theme of territorial sovereignty resonated in other speeches, as countries facing violations invoked their own trauma or cited Ukraine’s fate as a fear.

“We must not remain silent in Bosnia and Herzegovina either. We owe it to our vivid memories of the horrors of war and aggression,” Bosnia and Herzegovina’s presidency chair Sefik Zaferovic said on Wednesday. “The UN system could not prevent or stop the war in my country during that period. Between 1992 and 1995. Unfortunately, it happened again with Ukraine.”

Russia has long been accused of trying to destabilize the Balkans, including Bosnia and Herzegovina. Zaferovic’s turn on the rostrum came a day after Putin met with the Bosnian Serb separatist leader in Moscow.

Russian peacekeepers have been stationed in Transnistria, a breakaway region of Moldova, since the end of a separatist war in 1992. Sandwiched between descriptions of how the war in Ukraine – “our neighbor and friend” – has affected her country, Moldovan President Maia Sandu called for the “complete and unconditional withdrawal of Russian troops” from Transnistria.

Poland is Ukraine’s ally that has received the most refugees, and President Andrzej Duda mentioned the country 34 times in his speech on Tuesday.

“We must not forget those who are suffering,” Duda said. “We should remember that six months of Russian aggression in Ukraine has created the biggest humanitarian crisis in Europe since World War II.”

But Duda also highlights how Ukraine has captured the world’s attention when many important crises outside of Europe have not.

Were we equally determined during the tragedies of Syria, Libya, Yemen? After condemning two major tragedies in the Democratic Republic of Congo, the war in the Horn of Africa and the invasion of Ukraine, are we not back to business as usual, do we give the same importance to mercenaries seeking to destabilize the Sahel? Threatening many other countries in Africa? she said.

On the first day itself, Ukraine made more than 150 mentions in the speeches of leaders, including the UN Secretary General. Antonio Guterres opened the General Assembly by touting the agreement between Ukraine and Russia — with Turkey’s help — on grain shipments as an example of successful multilateral diplomacy. War was threaded throughout his speech, as he turned to its glorified yield.

“The fighting has claimed thousands of lives. Millions have been displaced. Millions of people around the world have been affected,” he said.

In the only video address to the General Assembly, for which he was given special treatment, Ukrainian President Volodymyr Zelensky himself called out the seven countries that voted against the allowance: “Seven. Seven people are afraid of the video address. Seven who responded to the policy with a red button. Only seven.”

None of the seven have spoken yet. But even if those countries somehow prevailed, Slovakian President Zuzana Kaputova said it was incumbent on other countries to advocate for Ukraine.

“The democratic world and all of us must be the voice of Ukraine. Voices that will not be silenced, voices that will continue to testify about Russia’s crimes in Ukraine,” he said Tuesday. “The voice that will remember, and that will act – so no one will ever be allowed to commit such an atrocity again.”