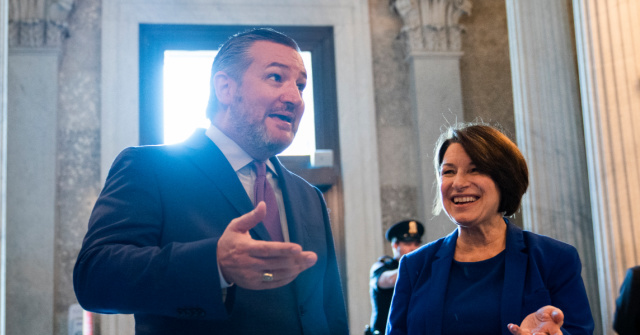 At a Senate Judiciary Committee hearing on the JCPA on September 8, Senator Ted Cruz introduced a motion that temporarily forced the Democrat co-sponsors to withdraw the bill.

If Sen. Cruz wanted to convey the Democrats’ pro-censorship motivation, he succeeded. But inexplicably, he has now agreed to a new amendment with Senator Amy Klobuchar that enables and makes it easier to oppose censorship.

The basic idea of ​​the JCPA is to allow media companies to form a legal cartel in the United States, with the sole purpose of negotiating with tech giants for special privileges.

When Sen. Cruz successfully inserted an amendment into the derided media bailout bill that limited the scope of that negotiation within the price, exposing the pro-censorship motivation of the bill’s Democrat supporters.

Its main sponsor, Sen. Amy Klobuchar (D-MN), prefers to withdraw the bill from consideration rather than limit the power of media cartels to demand that big tech companies censor their competitors.

Inexplicably, conservative icon Cruz went to Klobuchar to secure a back-room deal to facilitate the JCPA’s passage through committee without addressing any of the core structural censorship (or other) concerns with the bill. The deal is the type of D.C. swamp creature strategy that has dogged Republicans since Cruz joined the Senate.

In the process, Klobuchar revealed that the JCPA was never about rescuing mythical small-town newspapers: It was about cementing the power and influence of established media companies, while wiping out their independent competitors on social media.

Even with the Cruz-Klobucher amendment, the JCPA still enables censorship and shuts out media competitors.

In many ways the bill, as currently written, allows media cartels to exclude competitors from negotiating leverage with technology companies.

As previously reported, the bill gives media organizations the power to exclude members based on virtually any criteria

Specifically, the new JCPA includes a provision that allows “eligible” media companies forming a cartel to “create admissions criteria for membership unrelated to the size of the qualified digital journalism provider or the views expressed by its content, including criteria limiting membership to qualified publishers. or qualified broadcasters only.”

This provision is particularly significant for its specificity. These mainstream and left-wing media cartels cannot be excluded based on size or “opinions expressed by its content.” But that’s not how exclusion will or will happen.

While the Cruz-Klobucher amendment may limit formal negotiations between media cartels and Big Tech in value, there is no way to prevent the impact of the informal ties that will develop between cartel representatives and companies like Google, Facebook, and Twitter. An already-corrupt relationship, in which big tech companies willingly devote billions of dollars to helping the corporate media, will become even more corrupt – as Senator Cruz knows.

Of course, the Cruz-Klobucher amendment does not attempt to address the bill’s myriad other anti-disclosure and cartel-enabling provisions, such as the impossibly problematic arbitration and litigation provisions.

For example, the bill provides that a cartel can force a big tech company into an arbitration process to fix prices. But in any such process, the big tech company would have the inherent advantage—possessing all the relevant algorithmic and competitive information, not to mention fighting arbitration with more money, resources, and lawyers.

Will Big Tech fight to release any financial or algorithmic data, and how are news media companies supposed to protect their own competitive and proprietary information and data from each other in such a process? It’s an impossibility and a conundrum JCPA’s sponsors are either blind or don’t care – no, they just want to rummage through a poorly conceived and structured bill.

What is the remedy for a news media company excluded from a cartel? Well, it could sue in federal district court for inclusion. Doing so would cost thousands if not millions of dollars and expose all sorts of confidential and proprietary data to its competitors.

The built-in respectability of a defunct news media company for pursuing such a “remedy” cannot be overstated – assuming immediately that it has the entertainment resources to even do so. After all, the whole said purpose

JCPA stands for Helping Financially Crippled Local News. It is hypocritical to think that financially crippled local news outlets would have the money and resources to mount such fights.

This is why Senator Cruz’s actions represent such betrayal. Both he and Senator Klobuchar have presidential ambitions and they are on full display here. Both will walk away from the JCPA table under the guise of bipartisanship to push their own personal agendas. However, mainstream Americans will lag behind as usual, with even fewer sources for news not controlled by Big Tech censors. Indeed, passage of the JCPA will make the media more scrutinized by Big Tech.

Allum Bokhari is a senior technology correspondent at Breitbart News. He is its author #Delete: Big Tech’s War to Delete the Trump Movement and Steal the Election.