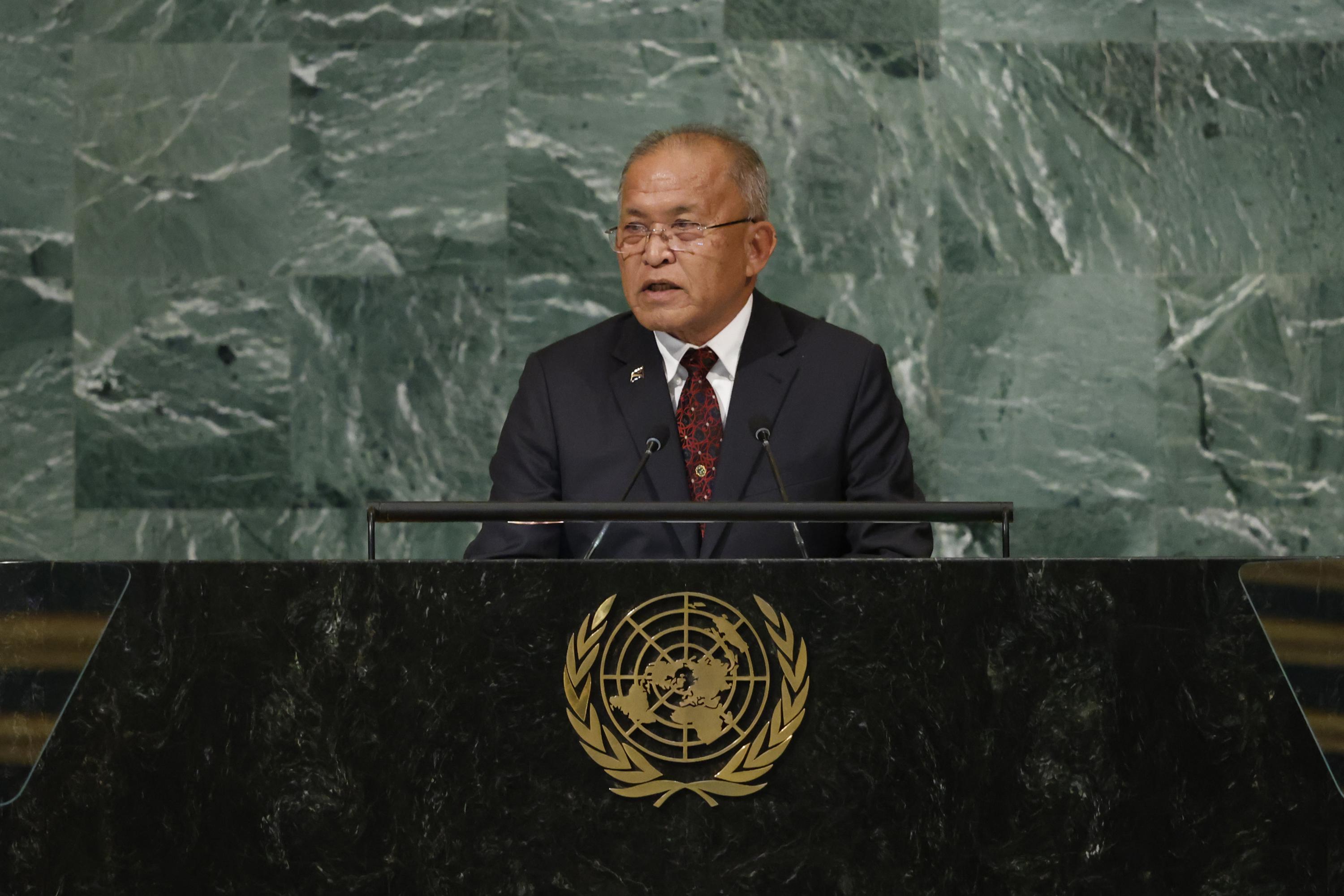 Even as world leaders from rich nations acknowledge the “existential threat” of climate change, Tuvalu Prime Minister Kousia Natano is racing to save his tiny island nation from sinking by raising land four to five meters above sea level by reclaiming it.

Although experts have issued warnings about the eventual habitability of the Marshall Islands, President David Kabua A seawall built to protect one house must accommodate the unevenness that is now flooding another next door.

This is the reality of climate change: some people can talk about it from afar, while others must live it every day.

Natano and Kabua tried to show that reality on the sidelines of the UN General Assembly on Wednesday. Together they launched the Rising Nations Initiative, a global partnership aimed at preserving the sovereignty, heritage and rights of Pacific atoll island nations whose existence is threatened by climate change.

Natano describes how sea level rise has affected everything from the soil his people rely on to grow crops, to homes, roads and power lines that are washed away. The cost of living, he says, eventually becomes too much to bear, causing families to leave and the nation itself to disappear.

“That’s how a Pacific reef dies,” Natano said. “Thus our islands will cease to exist.”

The Rising Nations Initiative seeks a political declaration by the international community to preserve the sovereignty and rights of Pacific atoll island nations; Develop a comprehensive program to build and finance adaptation and resilience projects to help local communities sustain livelihoods; Each Pacific atoll island nation is a living treasure of culture and unique heritage; and support for achieving UNESCO World Heritage designation.

The initiative has already garnered support from countries such as the United States, Germany, South Korea and Canada, all of which recognize the unique burden that island nations such as Tuvalu and the Marshall Islands must shoulder.

United Nations Intergovernmental Panel on Climate Change Report Published in February, it spells out the vulnerability of small island developing states and other global hotspots such as Africa and South Asia, whose populations are 15 times more likely to die in extreme weather than in less vulnerable parts of the world.

If warming exceeds another few tenths of a degree, it could lead to some regions — including some small islands — becoming uninhabitable, said Adele Thomas of Climate Analytics and the University of the Bahamas, a co-author of the report. On Wednesday, Natano noted that Tuvalu and its Pacific neighbors “have done nothing to climate change,” with their carbon emissions contributing less than .03% of the world’s total.

“This is the first time in history that the collective action of many nations has made several sovereign countries uninhabitable,” he said.

Delegates from other countries attending Wednesday’s event did not shirk the responsibility. But whether they will do enough to turn things around remains to be seen.

Many have pledged money to help island nations pay for early warning systems and bring their buildings up to code to better protect them from hurricanes and other weather events. But there is less talk about mitigating the problem of climate change and more about how to adapt to the devastation it has already caused.

“We see this train coming, and it’s coming off the tracks, and we have to get out of the way,” said Amy Pope, deputy director general of the International Organization for Migration.

Jennifer Morgan, Germany’s climate ambassadorwho also attended Wednesday’s event, spoke of his country’s goal to reach carbon neutrality by 2045 But while Germany has committed to phasing out coal as an energy source by 2030, it has had to reactivate coal-fired power plants. Winter amid energy shortages caused by Russia’s war in Ukraine.

For the president of the Marshall Islands, rich countries can do more. During his speech to the UN General Assembly on Tuesday, Kabua called on world leaders to embrace sectors dependent on fossil fuels, including aviation and shipping. He points to the Marshall Islands’ carbon tax proposal for international shipping that he says will “drive the transition to zero-emissions shipping, moving away from polluters to the most vulnerable resources.”

UN Secretary-General Antonio Guterres has similarly encouraged the world’s biggest polluters to follow suit. During his opening speech to the assembly on Tuesday, he pushed for rich countries to tax the profits of energy companies. And redirect funds to both “countries hit hard by the climate crisis” and those struggling with the rising cost of living.

Meanwhile, as rich nations call for action rather than words in their own UN speeches, Kabua, Natano and their fellow island nation leaders will continue to grapple with the realities of climate change on a daily basis — and try to survive.